CS:GO is the first Counter-Strike version with a modern (automatic) matchmaking system, which allows you to play competitive matches against similar skilled players. In this guide we will show you all existing Skill Groups, answer some frequently asked questions and try to lift some old myths about the Matchmaking system. 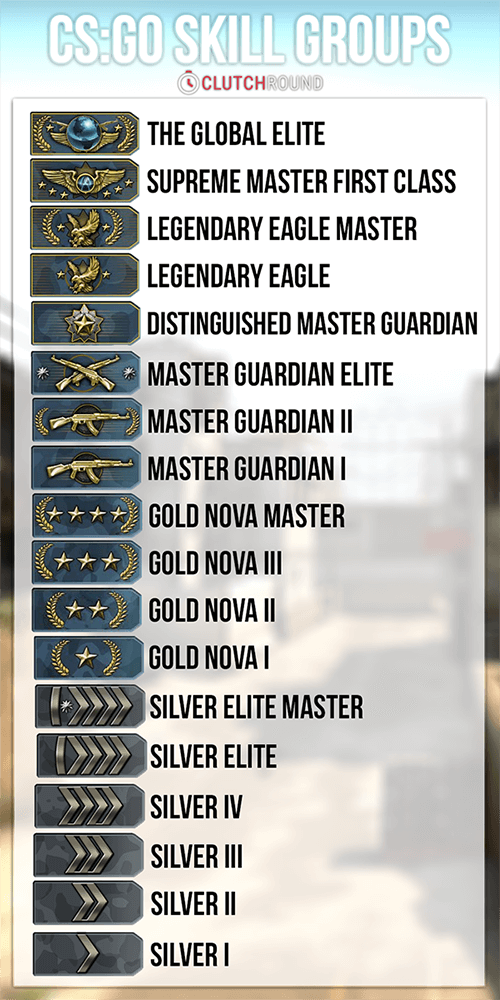 The following explaination of the cooldown system is from Vitaliy Genkin (Valve employee) via Steam forums:

Essentially if you got your second or third 7 day cooldown in a row this means you need to have two or three clean weeks after it expires before it goes down to offense level 3 which is penalized with a 2 hr cooldown.

There is a lot of misunderstanding how Valve’s Matchmaking System actually works. Some very detailed and well known guides (like this one in the Steam Guide section) are completely wrong as they assume Valve is using an ELO-like system for CS:GO.

For Competitive, we built a CS:GO-specific competitive ranking system that is significantly different and more complex than Elo.
-Vitaliy Genkin

There is no official statement or any kind of detailed explaination how the CS:GO Matchmaking algorithm exactly works. According to Vitaliy Genkin they are using a system, which is based on an improved Glicko-2 rating model, but much more complex in the end. Vitaliy also tried to lift some genreal myths about their system without going into details:

Debug output mentioned in the guide comes from game client code having very old calculations that were used by Xbox 360 and PS3 versions of the game where client calculations could be trusted and matchmaking used round-based skill adjustments in order to support drop-in and drop-out gameplay on consoles. That code is deprecated on PC however and those calculations aren’t currently used on PC. When competitive matchmaking as we know it now was introduced in CS:GO in late 2012 we switched all non-competitive game modes to use simple ping-based matchmaking. For Competitive, we built a CS:GO-specific competitive ranking system that is significantly different and more complex than Elo. The CS:GO competitive ranking system started with ideas based on Glicko-2 rating model and improved over time to better fit the CS:GO player base. All computations are performed on our matchmaking backend and multiple matchmaking parameters describing scientific set of rating variables of a player are represented to players as a their Skill Group. You should be able to find papers on rating systems involving rating volatility and rating deviations online to get a better idea about why our complex competitive matchmaking parameters cannot be represented as a single numeric value.

What is a Skill Group?
Like an Elo rating in Chess, the CS:GO competitive Skill Groups predict how well players will perform when playing against other players. Two equally skilled teams should, on average, win an equal number of matches when competing against each other.

Should I avoid partying with lower skilled friends because they will hurt my rating?
No. Firstly, the matchmaking system will take your lower-skilled friend into consideration when finding a match. And second, the system makes a prediction about how well each team member will perform in a match. So losing a match with a lower skilled player on your team is not likely to significantly impact your Skill Group. If you always play your best then your Skill Group will provide you with well matched teammates and opponents.

How can you predict my skill in only winning 10 games?
When you play your first game, we have no idea what your skill is. As you play more games, we use those wins and losses to make predictions about what Skill Group we think you should be in. The more games you play, the more confident the system is in predicting who the other players are that you should be playing against. Winning 10 games gives us enough data to confidently place you in a Skill Group where we think you’ll be matched up with others matching your skill level.